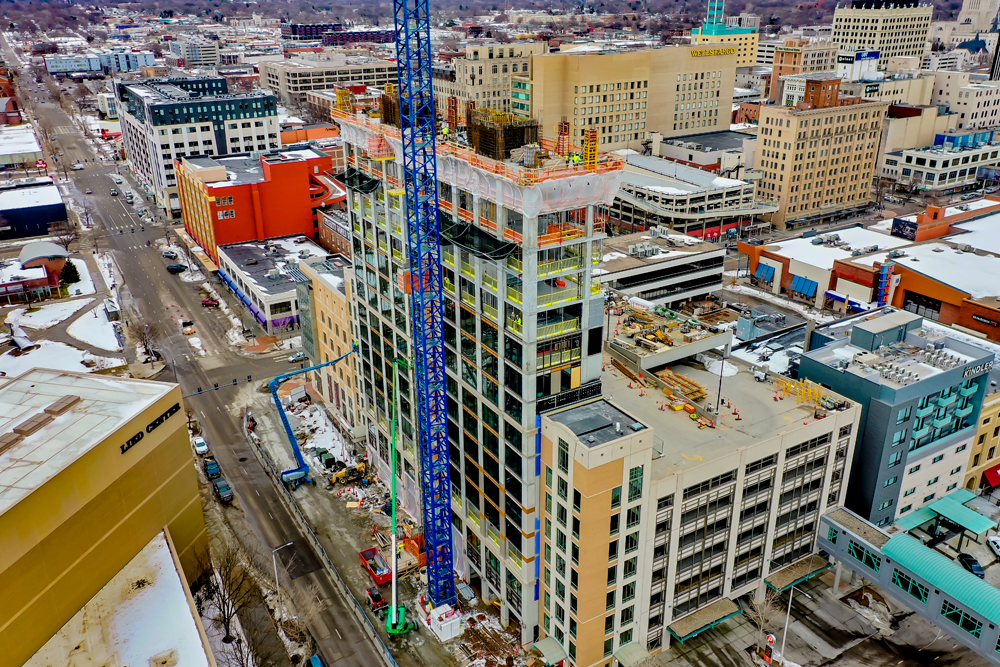 Extreme cold weather spread across the U.S. in late January, dropping heavy snow in portions of Arizona before delivering a record-breaking snowfall to Lincoln residents. For the construction crew at Lied Place Residences, the freezing temperatures, icy winds, and snow accumulation created complex challenges. With safety as a top site priority and no wind block for below-zero gusts at 200 feet in the air, crews moved inside the structure to patch, clean, and complete safety training sessions until the storm passed. When it was safe to work outside again, a new endeavor began: snow removal.

While area residents shoveled their driveways, crew members at Lied Place worked to clear every surface within the site. Snow cannot be pushed off the edge at 18 stories above the street, so the crew used shovels and blowers to move it to specialized blankets designed for this purpose, which were then lowered to the ground by crane. A separate waiting crew dumped the blankets and stockpiled the snow for trucks. Due to the intensity of the storm, most local trucking companies were employed to clear Lincoln’s streets, and the snow accrued until it could be hauled off for disposal.

With a clean site, construction efforts continued to focus on enclosing the building, framing the interior, and moving the structure upward. Currently completed work includes painting up to Level 9, drywall up to Level 10, windows up to Level 12, and framing up to Level 14. Level 19 was poured last week, which entailed transporting 275 yards of concrete to the deck in various forms: by pump truck as well as buckets lifted by crane. Presently at 198 feet, only five levels stand between Lied Place and its final height.